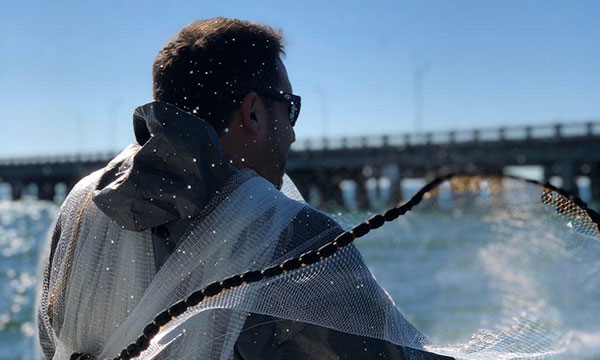 Cast net innovation doesn’t really come to mind when you first think of cast nets. However, this new Invi Series Cast Net designed by Black Pearl over the last 7 years, really surpassed all expectations. Previously, an idea was born to just make a cast net perform much better than all other cast net brands. Now, today, the New Black Pearl “Invi Series” cast net design might not load itself, throw itself or pull itself back into the boat all by itself, but it certainly does about everything else in a magical sense. Specifically, What is a true High Performance cast net truly designed to do?…. and that is….. to catch live bait as fast and efficient as possible with a One Throw and Go Attitude. Professional High Class Performance cast nets without excuses, clearly plain and simple.

Cast Nets are a Tool

Cast Nets are a simple a tool, but it can be a serious one for many charter captains, tournament anglers and serious fisherman. Obviously, no angler wants to waste their time just “trying” to cast net live bait. The New Invisible Leadline Invi Series cast nets will most certainly change the cast net industry. Without a doubt, by stepping up innovation to another level. Certainly, a level of Cast Net High Performance that has never EVER been seen before. The Invi Series was born with the vision to help eliminate braille tangles for faster loading and unloading.

Getting the Lead Out

Chain cast nets are the closest thing to this design, but they come with serious negatives. Increase of snagging due to the chain loops on the bottom, rust issues and most importantly the loudest clanging racket that deserves a 5 star rating. Specifically, creating the loudest db noise ever heard from a cast net as soon as the cast nets’ chain hits the deck floor.

The Invi Series Cast Net are quite the opposite. Thus,  not only comparing to chain cast nets but also comparing to the standard cast nets that have any size of exterior leads. Whether it be long leads, oval leads or round marble size leads, they are all loud and clangy cast nets. When a net hits the boat deck, there’s absolutely no way around it. I use this terminology a lot. “It is what it is” and that goes for so many things in life that this statement holds true.

Such as, when life throws something at you that you simply have no control over, a loud clangy cast net. The old standard exterior lead cast net models will without a doubt, be the thing of the past for performance nets. We will eventually look at exterior lead cast nets the same way that we look at 8 Track and VHS tapes today, simply non-existent.

Who would have ever envisioned that every person would have a cell phone, so much that landline phones are obsolete for private homes. Soon, they’ll be toothbrushes that spin so that you don’t even have to move your hand.. ohh wait…drones to deliver packages and mobile remote activated luggage so that you don’t even have to pull your luggage in the airport.. ohh wait.. Yes, it is available now!.. Technology is our future and so is every dream. A dream starts with a simple idea then is simply determined by you guessed it. DETERMINATION. What idea or cast net idea is next?

The Invi Series Cast Nets consists of tiny pieces of lead which is hidden internally inside of the leadline. This design creates a super tight, 100% bottom seal. Therefore, causing the net to lay perfectly flat on the bottom. Hence, creating zero spacing for bait to escape from under the cast net. The Invi design is completely opposite, comparing to exterior leads that can be spaced as much as 8″ apart from each other. Lastly, by having the lead hidden internally, this creates a 100% bottom seal unlike any other cast net ever manufactured, EVER.

Some of the more experienced fisherman are familiar with the Invi Series style by the name Leadcore/Internal Leadline. Leadcore is used in gill netting and seines. Specifically, when the net disperses out of the boat then it leaves the boat silky smooth with no exterior lead bumps to alter speed. Obviously, this causes a much faster, quieter and more efficiency application.

The problem with incorporating the standard known leadcore into a cast net assembly comes the stiffness associated with its concept. Our first idea and leadcore style cast net that we built secretly years ago was very interesting and it worked. However, when you held the cast net up the leadcore was so stiff and bulky wide at the bottom. Therefore, it caused a very large wedding dress appearance. The design really had a serious resemblance to being ready to throw Cinderella overboard!

However, we didn’t give up, we knew we were on to something years ago. Of course, we kept plugging away with cast net design. We incorporated a couple huge cast net changes. These changes would soon lead to something simply, magical. First. we decreased the size of the internal leads. This allowed for a much more limp physical feature. In addition, we combined two smaller leadlines and doubled them together, as opposed to one thick leadline. The combo of the two leadlines caused this new cast net prototype to have an extremely slinky snake like effect. Furthermore, the cast net not only loads and unloads effortlessly, but became the smoothest, slinkiest cast net ever manufactured or thrown.

Ya know the ole saying, “Shoot for the moon, even if you miss, you’ll land amidst the stars”. On this note, we shot for the moon, but overshot it dramatically. We landed somewhere that man has never seen, we still are not sure which planet that we’re on right now. There are no words to describe what took place after our assembly of this true work of art. A few stars, the moon, sun and earth finally lined up. By no means was this an accident. A lot of time, work and money invested into this dream, combined with a vision that was acted upon.

Without a doubt, I can honestly say that I certainly didn’t dream this BIG. Sometimes things just fall in your favor in a positive way. Then all you can say… “It is what it is”…but, this time we finally got to truly take the good with the bad and leave the bad far behind. Cast Net Mission accomplished.

In addition to the 100% bottom seal, Black Pearl Cast Nets has more braille lines than any other manufacture. More braille lines have a much better closure rate for keeping live bait enclosed. Therefore, this allows the leadline to move much more evenly against the bottom and also allows for a much tighter leverage of closure. A tight bottom seal keeps bait from escaping under the net while pulling in your cast net.

In addition to these performance features, the invisible leadline is not only much thinner in diameter but creates a much faster cast net sink rate. Since the leadline is doubled, this creates a drafting effect similar to racing. Less drag in the water means an even faster speed rate which calculates into more bait in your cast net without escape.

As always, Black Pearl Cast Nets has the exclusive “MaxSpread” design which simply means wider and easier throws every single time! Our “MaxSpread” cast net design has an increased width of Double XX-Large netting panel measurements. Larger netting panels create a relaxed netting measurement similar to a loose fit style of jeans instead of a standard tight netting measurement. Importantly, this calculates into an even higher performance ratio compared to traditional cast nets. This simply causes the netting to open much easier.

Larger panels keep the cast net from fighting itself to spread open fully in comparison to a tight measurement. Black Pearl is very well known in the industry to “overbuild” nets with more material, unlike our competitors. The XX-Large Commercial Grade netting panels with MaxSpread, combined with the 100% bottom seal is a true game changer. Lastly, due to the internal lead chain effect, the cast net catch rate for bottom dwelling species especially pinfish, mullet and shrimp goes up considerably.

An added bonus to this High Performance Invi Series cast net design naturally became the Cool WOOOW factor. This factor wasn’t discovered until that very first throw. The Invi became jaw-droppingly quiet as soon as it hit the gel coat deck. You could hear a pin drop, the birds sang, fish kept biting, bait stayed in the chum slick and the Angels flew down from above. One could see the spirit and magic of silence appear during and after this cast net loading and unloading phase… is this for real???.. How can a loud clunky cast net turn into simply music to our ears??…The sound of a wet T-shirt hitting the floor, almost silence. NO spooked fish or beat up gel coat! … It’s not Cast Net Magic… but Yes, undoubtedly Magical……